In the spring of 1976 a group of Thunderbird enthusiasts in the Roanoke area got together with the idea of forming a club to promote their interest in the two passenger Ford Thunderbird. An organizational meeting was held, officers were chosen, By Laws were drawn up, and an application was made to the State Corporation Commission for a charter as a non-profit limited corporation. On September 13th 1976 a charter was issued and entered to the record in the office the State Corporation Commission. The club continued to grow as word of its existence began to get around in the old car hobby. The new club decided to apply for a charter to become a chapter of The Classic Thunderbird Club International. After fulfilling all the requirements set by the International a charter was issued on June 25th 1977 for chapter number 75, The Star City Classic T-Birds Ltd.

Today the club is an active and vibrant organization that meets on a monthly basis. In the Fall and Winter months we meet at The Greenwood Restaurant on U.S. Route 11 in Troutville, VA. During the Spring and Summer months we generally hold one or two-day driving events. These can be picnics at scenic attractions in the area or a pot-luck dinner at a member’s home, or a week-end trip to a car show or destination of interest in one of the surrounding states. In December the club hosts a Christmas banquet at a local hotel or restaurant.

HOW WE GOT OUR NAME

The Star City Classic T-Birds Ltd. serves the southwest part of the state of Virginia and is headquartered in the Roanoke Valley. Roanoke is known as “The Star City of the South” because of the giant neon star located at the top of Mill Mountain which is located in the heart of the city. The club founders considered several names for the club and after a vote decided that Star City Classic T-Birds made a  nice tie-in with the city and county of Roanoke. The State Corporation Commission added the Ltd. when the charter was issued.

The Mill Mountain Star is 88.5 feet tall with 2,000 feet of neon tubing.It is the world's largest freestanding illuminated man-made star. It requires 17,500 watts of power to illuminate the neon tubes. Roy C. Kinsey of Kinsey Sign Company built the neon tubes with his three sons Roy Jr., Bob, and Warren. It was assembled near a local airplane hangar to study how it looked. Then it was driven to the top of the mountain and placed onto a steel structure. Robert L. Little was the Structural Engineer for Roanoke Iron & Bridge Works at the time and helped on the project as well. At night the star can be seen for sevaral miles on the highways leading into the city. By air it can be seen well over twenty miles away. 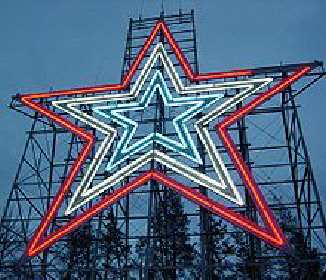 For more information about the Mill Mountain Star go to: http://en.wikipedia.org/wiki/Mill_Mountain_Star

To all members of The Classic Thunderbird Club International we extend an invitation to join us at our regular meetings. If you are in our part of the world on the third Saturday of the Fall and Winter months stop in at the Greenwood Restaurant between 8:30 and 11:00 am. We would love to have you.

Not a CTCI member? Interested in finding out about the Star City Classic T-Birds Ltd.? Join us for breakfast at the  Greenwood.